Castles Made of Sand: Territorial Turmoil in the South China Sea

It is much more than a philosophical query; there are some very tangible consequences of how maritime law is applied. But in a high-tech, globally-integrated era, even a seemingly settled question over territory can dissolve into a diplomatic catastrophe with alarming speed.

Just such an issue has been evolving in the South China Sea, a stretch of ocean bordering Vietnam and China along the Southeast of the mainland, separating it from Taiwan, as well as surrounding a host of islands from the Philippines to Malaysia and Brunei.

The combined weight of history, nuanced legal language, and considerations of the many diverse stakeholders and bordering nations in the area make the South China Sea one of the most complex, challenging, and consequential diplomatic quandaries of the 21st century.

Toes in the Water: National Boundaries and Island Chains

Although it’s named for just one of the bordering countries, the South China Sea plays host to a dispute involving China (including Taiwan), Vietnam, Malaysia, the Philippines, and Brunei. Each of these nations has laid claim to varying numbers of small, historically uninhabited islands scattered throughout the waters between them. The three primary island chains in question are known as the Paracels, the Spratlys, and the Scarborough Shoal.

Both China (including Taiwan) and Vietnam make a claim over the entirety of the South China Sea and three island chains. While the other claimant nations have limited their scope of inclusion to those islands closest to their primary coastlines (though not necessarily in accordance with UNCLOS), these overlapping maps of territory compound the challenge of sorting out borders and boundaries.

Under UNCLOS (the United Nations Convention on the Law Of the Sea), a nation’s Exclusive Economic Zone (EEZ) extends 200 nautical miles from its coastline. The rules of the EEZ confer territorial rights to the owner-nation for fishing, mining, and extraction of any other natural resources within.

There is a possibility that extensive oil and natural gas reserves lay beneath the disputed South China Sea waters; as yet, estimates are mostly speculative. The overlapping territorial claims mean multiple countries demand control over and access to the reserves, which they then endeavor to defend and protect. The tantalizing prospect of the energy reserves, along with the known value of the area for fishing, ensures a steady traffic all aiming to tap the same resources.

Collisions–accidental or otherwise–between the watercraft of different nations are a recurring event, as military vessels crowd in among private boats. Ambiguity abounds as to who (military or civilian) is actually operating ships bearing different flags, while accusations fly back and forth over who is threatening the delicate peace.

The instability created by military posturing and provocation increases the capacity for one mistake or a careless individual to initiate a chain-reaction of responses and retaliation that escalates into war. While war is not in the interests of anyone, fear of damaged reputations ensures no one backs down, even in the face of direct confrontation.

If there weren’t already a universal interest in seeing issues of territorial integrity and national sovereignty upheld, the economics and security implications of the situation ensure the eyes of the world are watching the South China Sea with great interest. 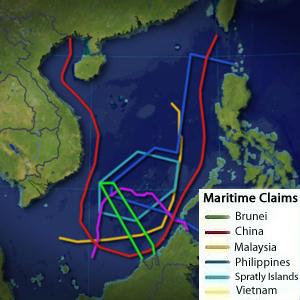 Why the South China Sea is Everyone’s Problem

Looking just at energy resources, nearly one-third of all global crude oil passes through this area, along with fully half of all liquified natural gas. In total, 60 percent of all world trade passes through here at some point in its journey to market. Clearly, more nations than those bordering the South China Sea have a direct stake in keeping it open and safe for maritime traffic.

Then there is the ever-important strategic and military value of the region. America has maintained a naval presence in the area since the end of World War II, expanding its reach from bases in the Philippines and Japan to extend influence and visibility across Southeast Asia. China, the predominant regional (as well as rising global) power, sees the same strategic advantages and is developing airstrips and bases on the islands to establish its own, permanent military presence.

Not only is this a direct challenge to the U.S. military dominance in the area, but it is also discomforting to the many smaller countries in the area either relying on the U.S. to provide security, or otherwise suspicious of China’s growing influence and military strength. If only to keep up appearances, the U.S. has a tacit interest in countering any effort to displace its navy.

Guns and butter aside, resolving the competing claims of the proximate nations sets an important precedent in international conflict management. Preventing hostilities, as well as preserving the ability of every nation to participate in the global economy, was one of the key goals of UNCLOS, as outlined in its preamble. Peacefully and permanently resolving the issues in the South China Sea could not only de-escalate existing tensions but provide a roadmap for managing future conflicts around the world.

Land’s End, and the Trouble with History

China relies heavily on history to establish its claim to the islands. Central to Chinese policy is the Nine-Dash line: a map issued by the Chinese Ministry of the Interior in 1947 which, using nine literal dashes along the outside of the South China Sea, broadly outlines where the Chinese government officially views its territory with respect to the other nations and land masses in the area. At its southern limit, this area extends some 600 nautical miles from China’s mainland, yet within 150 miles of the coastlines of Malaysia, and the Philippines.

Although the size and shape of the Nine-Dash line clearly contradict UNCLOS EEZ standards, the disagreement is not so easily resolved.

While UNCLOS sets standards for measuring and defining maritime territory, it does not explicitly regulate how disputed claims are to be managed. So while China, Vietnam, Malaysia, Brunei, and the Philippines are all parties to the agreement (the U.S. has signed but not ratified the treaty), they disagree over how UNCLOS should be applied.

Since UNCLOS rules measure territory from a permanent land anchor, the status of the islands plays an especially important role in determining what belongs to who–and how the surrounding ocean is divvied up. The combination of international law and modern technology has driven some creative–though confounding–initiatives in the South China Sea.

UNCLOS definitions mean that only about 40 of the features in the South China Sea can truly be called “islands.” This is significant because the maritime rules for uninhabitable islands differ from the land-area of a nation.

The point from which EEZs are measured is normally the low-water shoreline; in the case of islands, they must never be fully submerged, and be capable of supporting human structures on their own. Since many of the “islands” in the South China Sea are little more than rocks on which no settlement or structure would normally survive, they don’t count as islands for the purposes of establishing EEZs. Artificial islands count for purposes of national sovereignty, but not for expanding EEZ claims.

Both Vietnam and China, however, have been using modern technology to adjust the status of certain contested features, building out the rocks and islands within the Spratlys and Paracels to the point where they are no longer submerged at high tide, and attempting to construct new buildings on them. At their core, they are not technically artificial, as the construction expands an existing, permanent rock or island territory.

The scale and speed of China’s efforts are enabling it to post residential and military outposts on the artificially-expanded islands. Lighthouses, fishing ports, and oil exploration rigs have been strategically erected to further bolster Chinese claims that the disputed territories constitute lasting and significant human infrastructure–not mere spots of barren, submerged land.

While Vietnam cannot compete with the Chinese island-building project, it has managed to occupy and maintain a military presence on a greater share of the islands. Colonial France made similar claims over much of the area now claimed by Vietnam and helped set the precedent of securing and patrolling the territory with military vessels. In this way, nations unwilling or unable to establish a permanent physical presence on the islands instead maintain an armed military presence to control foreign traffic and reinforce claims.

The dispute has so far been free from any substantial, direct acts of aggression (colliding fishing boats notwithstanding). But China’s development and permanent occupation of the growing islands complicates U.S. military traffic in the area around (and the skies above) them, as the risk of collision or other provocative actions swells along with the islands’ surface areas.

Again, war is not in the interests of any of the parties to the dispute; arriving at a diplomatic solution is unfortunately not made any easier by the severity of the alternative. Except for the frequency and manner of confrontations, however, negation efforts bear a striking similarity to those surrounding a peace settlement.

All parties to the conflict have officially called for a bilateral solution, seeking the consent of every nation making competing claims to territory. As ratifying members of UNCLOS, they have a framework for drawing borders and setting standards. Lasting negotiations will be predicated on non-aggression and stability in the South China Sea. The mix of civilian and military presence in the water complicates this, however. There have been several instances of negotiations opening; much like peace talks during times of war, developments on the ground (or at sea) have repeatedly disrupted these initiatives.

Negotiating peace without a preceding declaration of war presents an enormous challenge. That the status of the South China Sea directly impacts the economy and security of the rest of the world adds a further dimension of seriousness to the proceedings. Altogether, resolving the tensions in the South China Sea constitutes one of the most significant, meaningful diplomatic endeavors of the 21st century.

A degree from Norwich University’s Master of Arts in Diplomacy online program will provide you with a deeper understanding of international relations. Your education will arm you with a foundation to think critically about situations like the one taking place in the South China Sea and understand the depth of complexity surrounding international conflict management.

Conflict in the South China Sea, Council on Foreign Relations

United Nations Convention on the Law of the Sea of 10 December 1982 Overview and Full Text, Oceans & Laws of the Sea

The UN Convention on the Law of the Sea and the Maritime Disputes in the South China Sea, American Journal of International Law

How to Become an IT Professional

Information technology and cybersecurity expertise are in high demand. Explore how to become an IT professional and protect businesses from digital attacks.

Demand for emergency nurse practitioners (ENPs) is increasing due to shortages in emergency care professionals. Explore the key responsibilities of ENPs.